How is GDP calculated?

It is important to know the GDP, because this concept is the most precise that economists use to date to measure the size of a country's economy.
Elvira Carrasco
9 March, 2021

The “total value of production” means that the GDP measurement includes all the goods and services that can be measured. Although some services, such as domestic services, are more complicated to quantify.

With final goods and services, we mean that GDP (GDP per capita) does not only include final goods in its measurement. For example, if a company sells a product X to another company to produce another product Y, only the value of the final product Y is taken into account, since product X would be an intermediate good.

The period of time in which the GDP of goods and services is measured refers to a quarter or a year.

In the following article we will see how GDP is calculated, since it is one of the most used tools in economics to measure the wealth of a country.

1.How is GDP calculated?

We can calculate GDP in three different ways:

Consumption (C) are the goods and services that families and companies buy for their final consumption, such as food, appliances, a drink, or a visit to the doctor.

Investment (I) is the total purchases made, generally by companies, in capital goods or machinery to produce more goods, such as a computer.

Public expenditure (G) is general government spending on goods and services. This includes the salaries of officials, the construction of a school or the organization of a public event, but we exclude the payment of pensions or unemployment insurance, because there is no exchange of services.

Imports (I) are goods brought from abroad, thus reducing the GDP of the importing country. For example, if a person buys a mobile made in China, the value of the mobile counts as consumption, but is subtracted as import, so it is not really affecting GDP. Thus, if a country’s exports are 15 million and imports 10, what is actually counted in GDP is 5 million, corresponding to net exports.

In summary, if we add all the values discussed above, we obtain the GDP of a country or a region.

The GDP calculated through income will be the sum of the value generated in the country, from the point of view of who has received the generated value, and in which hands it ends up by the use the available productive factors.

That is, everything that is produced in the country is produced thanks to labour and capital, and the sum of labour and capital must be equal to the sum of the compensation of employees plus payments to capital (gross operating surplus, benefits, interest payments, rents…). We also consider as payments to capital the gross mixed income, which are the payments of the self-employed.

That is, the sum of: compensation of employees (COE), gross operating surplus (GOS) and net indirect taxes deriving from subsidies (taxes – subsidies).

The difference between the two is that nominal GDP uses current prices of goods and services, while real GDP uses a base year of prices for subsequent years.

Let’s see it with a simple example.

As we have seen previously, GDP has different components: consumption, investment, government spending, and net exports. Suppose that GDP in year 1 was 600, and in year 2 it was 900. This increase may be for two reasons.

Real GDP is the real production leaving aside the influence of the change in prices.

For example, suppose that an economy only produces two goods, computers and mobiles.

For year 1, 100 computers and 400 mobile phones were produced at a price of 1 and 2 euros respectively.

To calculate the nominal GDP of year 1, we simply multiply the quantities of year 1 by the prices of the products by their corresponding products and add them: the GDP for that year would be 900 euros.

To calculate the nominal GDP of year 2 we do the same: We multiply the quantities of year 2 by the prices of the products by their corresponding products and add them. Thus, the GDP for that year would be 2,100 euros.

Now we are going to calculate the real GDP of year 1 and 2. We choose year 1 as the base year, because we are only interested in changes in production, and we leave the constant prices.

In year 1, we multiply the number of computers and mobiles by their corresponding prices, and the result is 900 euros.

For year 2, we multiply the computers and mobiles of year 2 but by the prices of the base year 1. The result is a real GDP of 1350 euros.

That is why economists use real GDP: It is a better average economic growth than nominal GDP.

What is market research and how to conduct it?

In this article we explain how to do a step-by-step market research and how it will help you to grow your business. 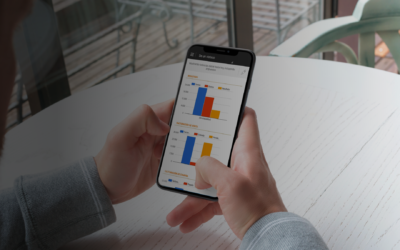 What is reporting and what is it for

Reporting is used in new strategies when making business decisions, through the classification of sales and purchase data within a company. This system, which was used by large companies, is now a competitive advantage that SMEs must use to stay in the market.